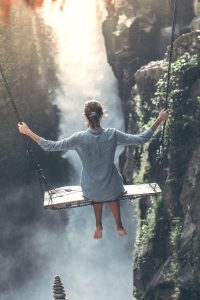 om something that was going to take courage to make the change? Or, did you make excuses and procrastinate the action that you needed to take? In other words, did your need to stay in your lane get in the way of progress?

I can hear the voices in your head going “But, it could all go wrong.” Maybe, the voice in your head should be asking you “What if it goes great?” You can play the ‘What IF’ game forever and never get off start.  It is important to fail early and fail often. If you have never had a failure in your life, you haven’t learned anything.

Early in my career, I attended a lecture given by Jack Canfield to guidance counsellors.  It was when he was just starting out. He wasn’t the Jack Canfield we know today.  He was an individual with a passion to change the world of children.  He had several messages.

The bottom line is that you are in the Olympics called Life. You will never be a medal contender unless you do something different today than you did yesterday. Why would you squander the time you have? Why would waste a minute of a day, where you could make a difference? Where are you stuck? Who can help you get unstuck?

When you are born, you deposited between 27,000 and 30,000 days in the bank account called life. We were born to make a difference.  We were born to actively participate in this world rather than withdraw from the world. Every day is a withdrawal from your life bank account.

My Rule 5 Challenge for you:

Get off your backside and do something, anything.  Stop making excuses. To paraphrase, Richard Branson “Screw it, just do it.”

“You’ll never plough a field by turning it over in your mind.” Irish Proverb

“We are what we repeatedly do. Excellence then, is not an act, but a habit.” Aristotle