Today is a to 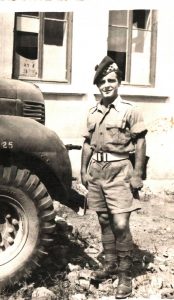 ugh day. This is going to be a longer post but the topic is as relevant today as it was on November 11, 1918 (the 11th hour of the 11th day of the 11th month) when Armistice was declared ending World War I. It ended the Great War, the war to end all wars.

We’re reminded to remember those, who’ve served in the military, merchant marines, and the resistance, regardless of the side. As I imagine many people do, I remember a parent, grandparent, family member, or friend. I remember my father. His lot in life was very different from mine, and so was his military service: he was a wartime vet; I am a peacetime vet. To sum it up with military precision, my stint wasn’t as dangerous as his.

My father served in the British military from 1939 to 1949, through World War II and the partitioning of Palestine. For the rest of his life, he remembered the men who had died, wondered about the men he’d lost contact with, and understood the men he knew who were never quite the same. He understood them because he, too, was never quite the same: he had intermittent nightmares, never really slept, ate quickly, and surveyed his surroundings for danger until the day he died. To his eternal regret, he came to understand that politicians declare war but don’t fight them and often don’t send their children to serve.

For ordinary soldiers in danger zones, debating the moral and political philosophies of war takes second place to dealing with reality: you do what you have to do, ensure your own survival and the survival of the people around you. You watch their six – their backs – and they watch yours.  You hope that with an occasional assist from the Fates, God, or Lady Luck, you get each other out alive.

We, Canadians, have among us veterans of a number of wars, peacekeeping forays and “conflicts”. Yes, I know – ‘conflict’? It sounds like an argument at a local bar that degenerated into a punch-up. It’s the preferred term of politicians for ‘non-global warfare’. Their intention is to keep the the rest of us from coming to the polls and tossing them out on their ears. After all, Canadians mustn’t be disturbed by reminders that the world isn’t always a pleasant place. Unfortunate as it may be for both the intentions of our well-meaning politicians and the state of our collective nerves, using inaccurate or obfuscating descriptors does not alter reality: ‘veteran’ means ‘someone who survived a war’, not ‘someone who refereed a debate’.

Not all Canadian veterans are considered eligible for support by our federal government. Why? Ask the politician you elected. Possibly he or she thinks, as President Trump is reported to have said, “they knew what they were doing was dangerous”, which is all too likely to be understood to mean “they chose to do something dangerous and shouldn’t whine about the consequences”. It’s true that soldiers choose to put themselves in danger of injury or death. But unlike, say, jackasses who put themselves in danger by skiing in areas clearly marked off-limits or sailing off into the sunset after being told the port has been closed due to severe weather, soldiers take risks so that the rest of us don’t have to take them. If it needs to be said, the same is true of police officers, fire fighters, first responders and all the other people we look to when the universe hands us lemons. Or, we discover that there are those among us who are such poor specimens of humanity we wish we didn’t have to admit that they were human.

There were, are and will be people who prove unworthy to wear their country’s uniforms – or those of their city.  The failures of those few do not negate the actions of those who served and serve honestly and bravely. When we honor individuals, who died in our wars and respect and care for our living veterans, we show that we’re committed to making the best world we can even when the price paid is high. It can be uncomfortable to know that we owe a debt we can’t repay, but to any decent person, that discomfort is infinitely preferable to the shabby selfishness that believes itself entitled to the service and sacrifice of others and discards those who serve and sacrifice once they’ve served their purpose.

To be blunt, the way we treat our country’s veterans tells our children, our families, our neighbours, our colleagues, and everyone who might one day make a career of protecting us whether or not we’re worth serving. So, this Remembrance Day ask yourself if you’re worth a brave and honest person put at risk. If you aren’t, you should be.

Then say ‘Thank you’.

Then, remind yourself that every person who serves in the military hands their fellow citizens a blank cheque. Some of those cheques are cashed for lives and some for lifelong injuries.

Those who hand us that blank cheque do it because they wanted to make a better world – or at least help protect the good parts of the one we’ve got now.

The next time you see the politician you helped elect, ask what they’re doing for our veterans.

We don’t just have the right to know; we have a moral obligation to find out,  because our politicians cash those blank cheques in our names.

Thank you, dad for serving, living and setting an example of service, strength, and courage.

We remember and give thanks.

For songs of Remembrance, go to this link.  Let it play you will get some of Canada’s best.  It will start with Soldiers Cry.