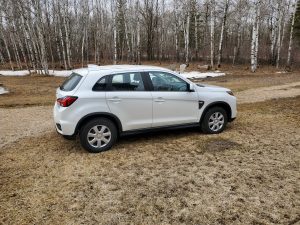 Top Gear has been a go-to show at our house since my husband and I discovered British Television in Canada. Albeit it is challenging since the Canadian TV carriers are about as reliable in-service delivery as ice cream staying consistent on a hot day.

Today, I am going to channel Richard Hammond.  Richard and I have a lot in common. We both belong to the vertically challenged club. He also didn’t hold back when he reviewed a vehicle. He knew what he liked and wasn’t shy about letting you know.

I want to meet the wizards that design vehicles. I am positive that they are in a bubble that is all about look and nothing about function. Which brings me to the Mitsubishi RVR (AWD).

I rented this vehicle from Enterprise Rent A Car. I want to make sure that you understand that the individual vehicle pickup drops don’t have a lot of influence on the cars that are part of the fleet. So, give Enterprise a break for the following review.

I am in the market for a new vehicle. My strategy has always been to rent a vehicle and take it for a road trip. In this case, it was a 2,000-mile trip from Winnipeg through Wisconsin and back.  Let me share my observations of the RVR in no particular order.

Pros: Things that are okay but not exceptional

Cons: Things that just plain are unacceptable and unexceptional

As an aside, my husband is 6’4” tall.  He can’t sit in either the passenger or driver’s seat comfortably.  Picture this man folded into a Mazda Miata.  Same challenge with the RVR.  Comfort isn’t an option in the RVR at his height, or my 5′ 3″ either.  In fact, after 2,000 miles, it isn’t the vehicle for me.

In conclusion, this vehicle was a rush to judgement. Someone from Mitsubishi should have taken this vehicle on a road trip while it is still a concept vehicle. It is the most uncomfortable vehicle that I have driven in the last 20 years.  If you are going to drive any distance except to the grocery store around the corner find another vehicle.  Mitsubishi dropped the ball on this one.